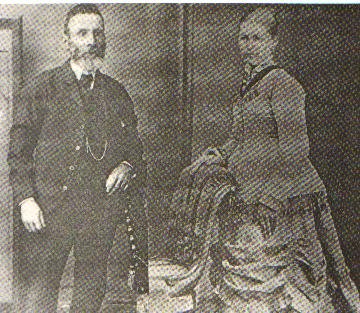 Third Child of ALLAN and MARY.

Third child of Allan and Mary, Eliza was born at One Mile Creek in the Maitland area and moved around the northern area of New South Wales with her family until her marriage to John Morris at Tamworth on 13 Sep, 1880. The newly weds then went to live in Tenterfield where John was employed as a bridge builder. Her death there in 1895 following the birth of her seventh child who only lived a few months. She was buried just inside the entrance to the Tenterfield cemetery, her son and husband being buried along side her at later dates. She died 13 Aug, 1895 from heart failure.

In the search for more information on her life the only reference found in Tenterfield was a short piece in "The Tenterfield Star" newspaper dated 10th August, 1895. I quote from that;

"On Monday morning a Mrs. Morris who lived near the Railway station succumbed to exhaustion."

John had come to Australia from Newfoundland, installed the piers for the original Hawkesbury River Bridge and then was in charge of the construction of the existing old bridge over the Clarence River at Tabulam, which is reputed to be the first steel bridge in New South Wales, as well as building other Northern Rivers Bridges, which are no longer in use. His eldest son also worked on the Tabulam Bridge.

Lady Luck followed John. In a syndicate with four others he won Tattersals lottery (three thousand pounds) and then three months later he won the same lottery alone and built one of the first brick homes in Tenterfield. It is on the left side of the Pin Oak lined High street which becomes the Bruxner Highway to Casino. After being extended it became a boarding house and today houses a museum.

John and Eliza had seven children:

Following Eliza's death her brothers and sisters helped take care of the younger children, just who they went to has not been established but Elizabeth Eliza spent a lot of time with George and Agnes and family.